NEW YORK (August 2, 2004)– Seven years ago, a then 4-year old Mitchel was trying to help out his father by refueling the lawn mower. He was attempting to fill its tank when he accidentally spilled some fuel onto the hot exhaust. Instantly, the gas ignited. The flames leaped onto the canister he was carrying and from there set Mitchel’s little body on fire. Mitchel spent two months at the burn center of Harborview Medical Center in Seattle, Washington where he underwent a series of painful skin grafts. The procedures reduced visible scarring on his scalp but did nothing to restore his hair. As a result, most of the left side of his scalp had become completely bald. Upon first attending school, he was teased by his classmates who didn’t understand his misfortune. Gradually, they came to accept his physical appearance and Mitchel was able to cope with his condition.

Mitchel, who is now 11 and on the verge of his teen years, is soon to attend junior high where he will be judged by a new set of peers. He is entering a stage where his self-esteem is closely tied to his body image and the pressure to look like other teens will become enormous. In a world where wearing the wrong kind of clothes can make one a social outcast, where both body-piercing and corrective surgery have become highly fashionable and girls endure clinical malnutrition out of fear of becoming overweight, teens look to the opinion of their peers in order to gauge their own self worth. “Belonging” is the most important thing on their mind and having a strong circle of friends means that they have been accepted. The consequences of failing this test can be devastating. In extreme cases, the emotionally charged effects of rejection can even lead to suicide.

So for Mitchel, the possibility of being socially stigmatized because of his traumatic baldness is in no way a trivial matter. His parents are naturally sympathetic and concerned and are willing to do whatever they can for him. Unfortunately, because hair restoration surgery is considered by insurance companies as an elective procedure, Mitchel is not covered and his parents simply cannot afford to pay for it on their own. That’s where the International Society for Hair Restoration Surgery (ISHRS) steps in with OPERATION RESTORE.

About the ISHRS and OPERATION RESTORE

Formed in 1993, the ISHRS is a not-for-profit international organization created to facilitate information exchange, continuing medical education and rapid diffusion of innovative surgical techniques and instrumentation technology. Included among its main objectives is a commitment to support and promote high ethical standards in the field of hair restoration. The society counts over 700 physicians worldwide among its membership, making it the largest such organization in the world. Many of its members are leading surgeons and researchers in the field of hair loss, having written numerous books and articles for medical journals and public awareness.

The effect on self-esteem caused by hair loss is particularly traumatic on those for whom it has occurred rapidly due to injury, tumor removal or disease. For years, several members of the ISHRS have volunteered their skills and services to patients who do not have the means to pay for hair restoration and given them a chance to rebuild both their self-esteem and their lives.

Last fall, under the auspices of leading surgeon and dermatologist Paul Rose, MD, several members of the ISHRS officially launched OPERATION RESTORE, a pro-bono foundation, whose mission is to match prospective hair-transplant patients with physicians willing to help people who lack the resources to obtain treatment on their own. In just a few months, OPERATION RESTORE has quickly grown into a membership of 35 ISHRS volunteer physicians.

Mitchel cannot be treated with the medications currently available for hair loss because he has lost the hair follicles necessary for hair regrowth (see Fig. A). Instead, he will undergo a 3-step surgical procedure.

The first step involves a technique called tissue expansion. Originally developed for breast reconstructive surgery, tissue expansion facilitates hair restoration by stretching healthy, hair-covered scalp tissue, which will be used to cover the bald area. This is achieved by implanting a balloon-like device under the scalp next to the area of hair loss. Over a period of time, which can take several months, the device is slowly inflated. As it increases in size, the tissue compensates by stretching. But the process doesn’t just stretch the skin, it also stimulates the growth of new tissue. When the size of the expanded tissue is about 130% of the hair loss area, the expansion is complete.

The second step is another round of surgery where the area of his scalp lacking hair follicles is removed and then covered by the newly-expanded, hair-covered tissue (see Fig. 1).

The third surgical procedure consists of transplanting some of the hair follicles to restore a natural-looking hairline and to fill in areas of sparse coverage. Although there is no history of hair loss in Mitchel’s family, it is possible he will experience hair loss as he gets older due to the multiple procedures. However, his new appearance should see him through those difficult teen years after which any potential hair loss can be treated with additional hair transplantation.

Thanks to OPERATION RESTORE, Mitchel will have a better chance to obsess over the things teenagers obsess over best: friends, dating, sports and getting into a good college.

OPERATION RESTOREmatched Mitchel with Dr. E. Antonio Mangubat of Seattle, WA, making him the foundation’s first patient. In May 2004, an expander was inserted under the right side of his scalp with completion of the expansion expected by late August. At this time, surgery will be performed to pull the hair-covered flap over the area of the scalp now covered by skin grafts (see computer rendition, Fig. B). Dr. Mangubat will be presenting Mitchel’s case study in Vancouver, Canada, August 11-15, accompanied by Mitchel himself and his parents. At that time, Mitchel will be almost ready for step 2 of the restoration, as the expansion of his scalp will soon be completed.

Paul T. Rose, MD Chair, ISHRS Pro-Bono Committee and OPERATION RESTORE
Secretary, member of the Executive Committee and Board of Governors of the ISHRS
Board Certified by the American Board of Dermatology
17 years experience in Hair Restoration
Cell phone: 612-965-4247 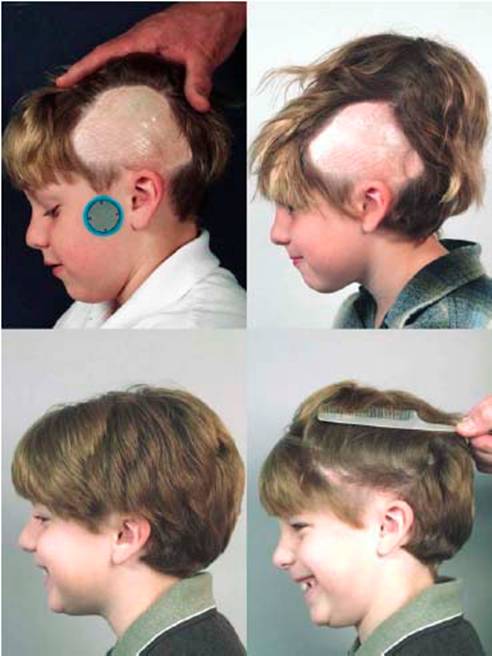 Fig. 1: Example of an 8-year old boy with skin graft (top left), who underwent scalp expansion (top right). Bottom photos show results 3 months after the skin graft area was removed and the newly stretched scalp was reattached over it. 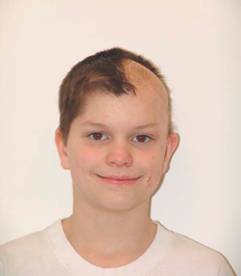 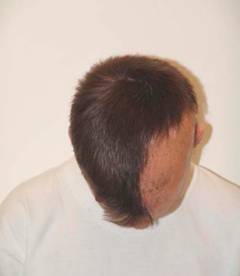 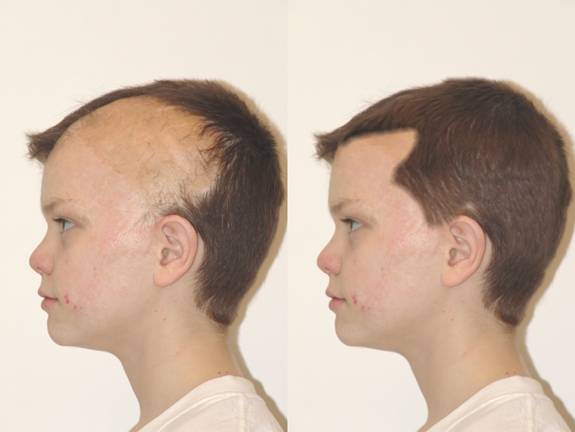 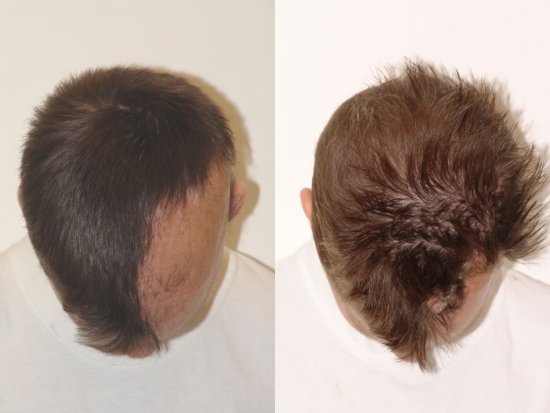 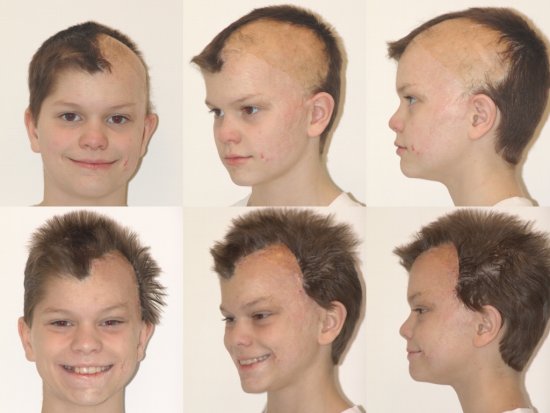 Post-op Photo 2: 3 weeks post-op. Even though complete excision of skin graft was not possible, the cosmetic improvement is obvious as well as the patient’s approval of his results. This result could not be achieved with simple hair transplantation surgery and require the advanced skills possessed by many members of ISHRS. 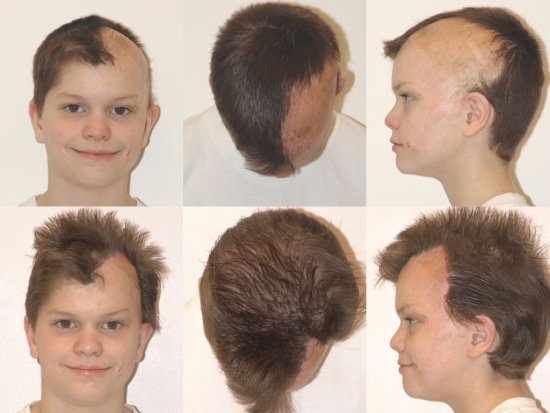 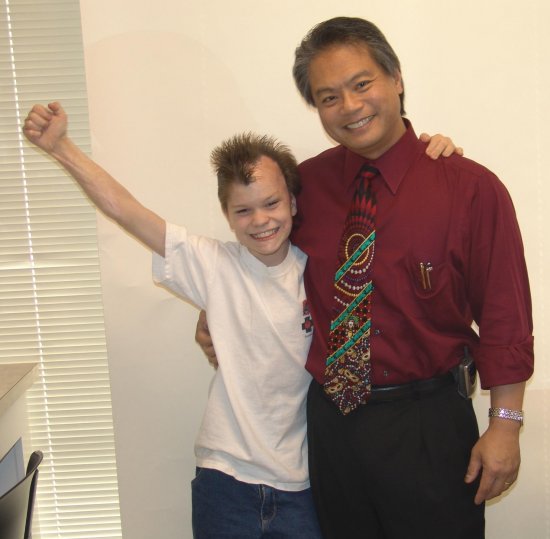