Operation Restore is the International Society of Hair Restoration Surgery’s (ISHRS) pro bono program, designed to match prospective hair restoration patients suffering from hair loss as a result of an accident, trauma or disease with physicians willing to help people who lack the resources to obtain treatment on their own. Since its inception in 2004, Operation Restore has provided more than $340,000 worth of free hair restoration surgery and expenses for dozens of patients suffering from hair loss due to these circumstances.

Today, Operation Restore boasts a membership of 81 ISHRS volunteer physicians worldwide who are committed to restoring not just hair, but the diminished sense of self-image and self-esteem that often occurs when a person suffers from unexpected hair loss. In 2010 alone, eight patients – ranging in age from 7 to 49 – have been accepted by Operation Restore to receive pro bono hair restoration surgery services.

The following are three case studies of Operation Restore patients who have successfully completed hair restoration surgery courtesy of the ISHRS and its member volunteers (pre-op and post-op photos of each patient follow these case studies). Their stories are unique, but each has one thing in common with all the Operation Restore grant recipients – they likely would not have had their hair restored without this program.

When 4-year-old Shane Chilson was diagnosed with a brain tumor, the diagnosis was crushing for his family. Determined to overcome this potentially fatal cancer, Shane’s aggressive radiation treatment worked in killing the tumor. The only downside was the radiation also killed nearly 50 percent of his hair follicles, leaving him with a large bald spot at the top of his scalp.

For many years, Shane endured endless teasing from kids at school about his hair loss – even being subjected to the nickname “Baldie.” The older he got, the worse the teasing got and the more self-conscious he became of his noticeable bald spot. That’s when Shane’s mother started searching the Internet for help and eventually found Operation Restore.

Shane’s application was accepted by the Operation Restore program to receive free hair restoration surgery, and he was matched with Minnesota hair restoration physician and ISHRS member Dr. Ronald L. Shapiro. In June 2008, Shane underwent an eight-hour procedure in which Dr. Shapiro transplanted thousands of tiny hair follicles from Shane’s existing hair into the bald area. Within six months, Shane and his parents started noticing his hair growing back and his results continued to improve one year after his surgery.

Today, at age 13, Shane looks like any other 8th grader in Bowling Green, Mo., and is no longer singled out by his bald spot. His father, Mark, noticed that Shane’s personality has definitely improved after his hair was restored. Shane is more outgoing and even looking forward to a small follow-up procedure with Dr. Shapiro to fill in thin areas of hair that Dr. Shapiro has volunteered to improve the density for Shane.

Mark is very grateful to Dr. Shapiro and Operation Restore for their generosity in helping Shane.

As a 9-month-old baby, Addison Copeland suffered an almost unimaginable injury. She was severely burned over 45 percent of her body and half of her scalp from hot grease that spilled on top of her during a kitchen accident. The accident left her without hair on one side of her scalp that did not grow back, even as she got older.

While Addison’s mother, Bobbi Jo, was worried about all of Addison’s scars, it was her hair loss that most worried her because it was so noticeable. Not one to let her daughter suffer in silence, Bobbi Jo shaved her own head to look like Addison’s when her daughter was three years old. Then she took to the Internet to see if there was hope for her little girl. Fortunately, she found Dr. Jeffrey S. Epstein of Miami and learned about a pro-bono program he was involved in – Operation Restore.

Within 15 minutes of emailing Dr. Epstein a photo of young Addison, Dr. Epstein was on the phone with Bobbi Jo and explained how Operation Restore could likely help her daughter. Once she was accepted by the Operation Restore program and matched with Dr. Epstein, Addison and her mother traveled from Ohio to Miami to begin the first of many surgeries over the course of several years.

Starting at age 5, Addison has undergone four surgeries that involved expansion of the scalp, followed by the excision of a portion of her scarred scalp and recovered by healthy expanded scalp skin. To provide further refinement, hair grafting was also performed to soften the hairline and fill in areas of the scalp that could not be achieved with tissue expansion.

Now, at age 9, Addison’s hair is almost completely restored. Dr. Epstein will perform some additional hair grafting in November 2010 to further refine Addison’s results. Her mother believes the hair restoration surgeries have changed Addison’s life and wonders what would have happened if she hadn’t found Dr. Epstein and Operation Restore.

As a young girl, Vonetta Chisholm suffered extensive hair loss from a fall that severely injured her scalp. For the next 20 years, Vonetta tried her best to keep her hair loss under wraps – using wigs and weaves to cover the hair loss and avoiding activities like bike riding and swimming that might reveal her well-kept secret.

When Vonetta met Charlotte, N.C.-based hair restoration surgeon Dr. Jerry Cooley, she learned about the Operation Restore program and how it has helped many patients, like her, who suffered hair loss as a result of an accident, disease or trauma. Dr. Cooley encouraged Vonetta to apply to the Operation Restore program to cover the cost of the numerous surgeries that would be needed to fully restore her hair. Learning that she was accepted by the program and matched with Dr. Cooley, Vonetta literally felt like she had won the lottery.

Beginning in April 2007, Chisholm underwent four procedures with Dr. Cooley over a 10-month period to repair her injured scalp, where hair was no longer growing and to restore hair to that area. Since Vonetta had a big white linear scar on the frontal scalp area that a hair transplant alone would not have helped, the first two procedures performed by Dr. Cooley were scalp reductions – which were very successful in getting rid of the scar area.

The next step was a traditional hair transplant surgery. Dr. Cooley determined from her initial consultation that Vonetta had plenty of good hair to begin with that could be successfully transplanted in the bald area.

For Vonetta, the improvements have been better than she ever imagined. She now goes to work without a wig and enjoys many of the activities she didn’t do before her hair transplant. 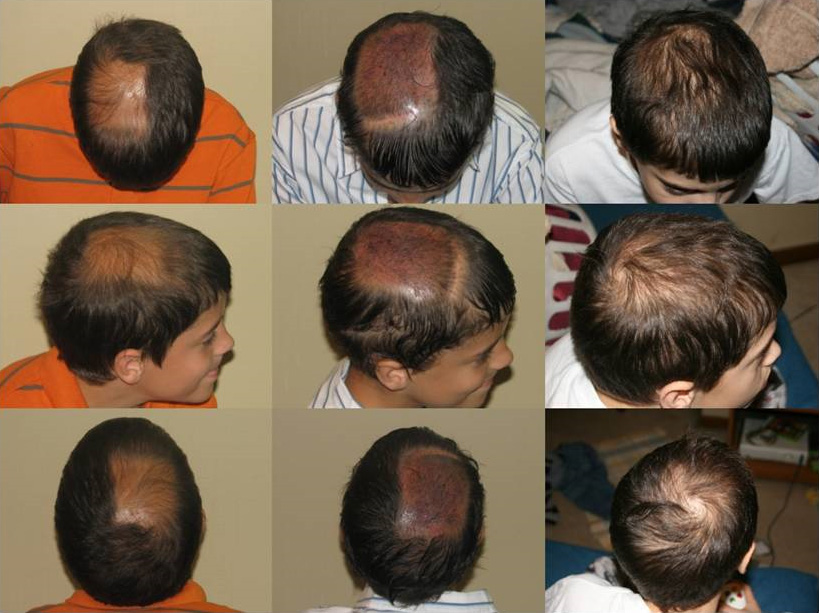 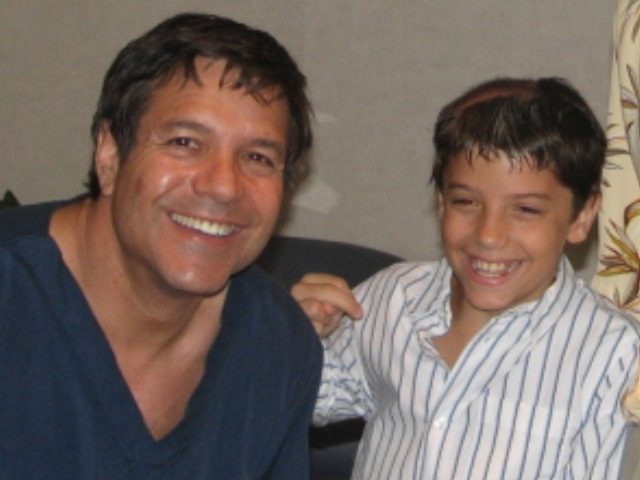 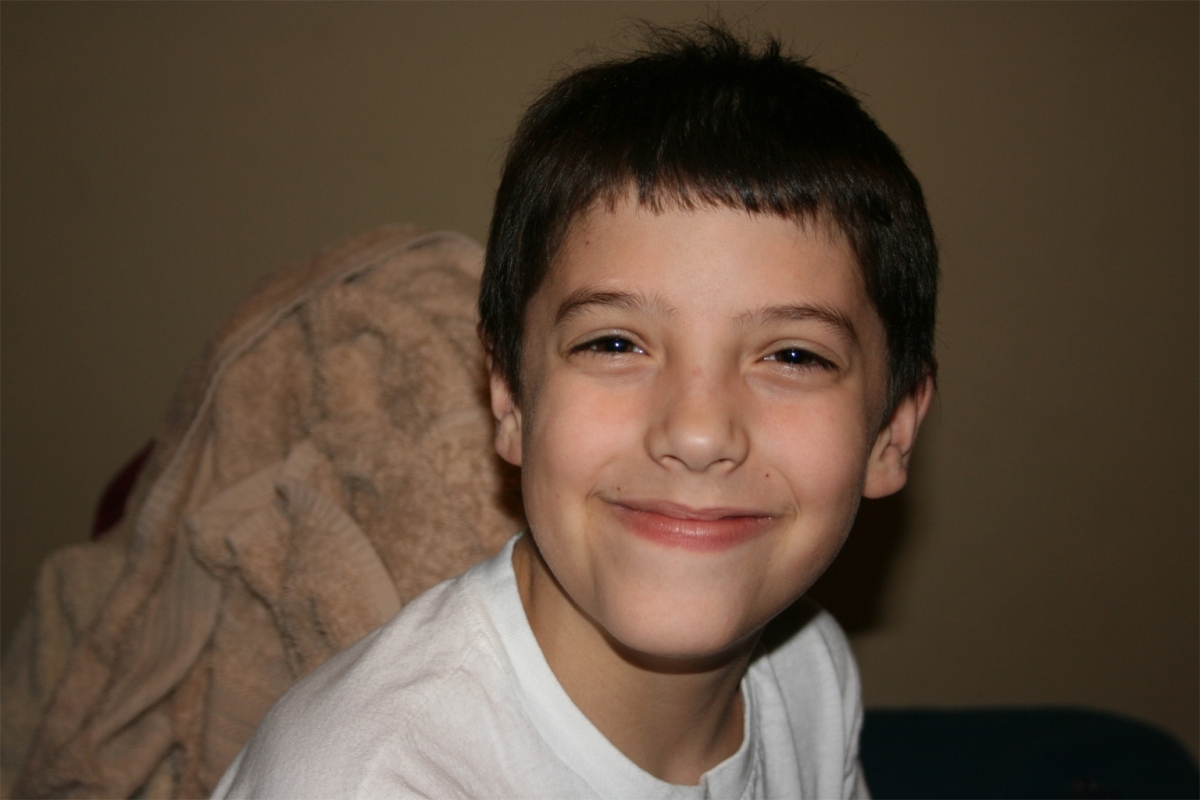 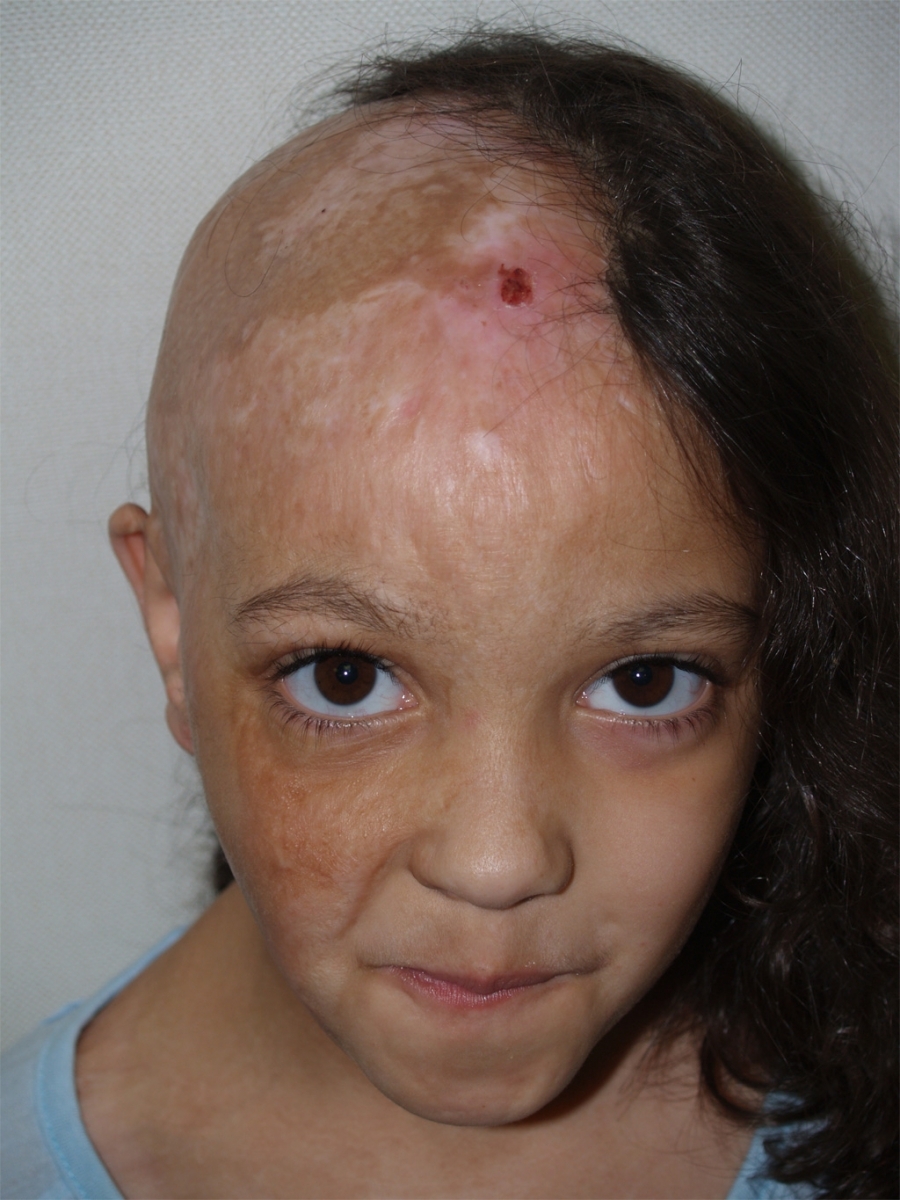 Addison Copeland suffered hair loss over half of her scalp due to a kitchen accident (burn) when she was a baby. 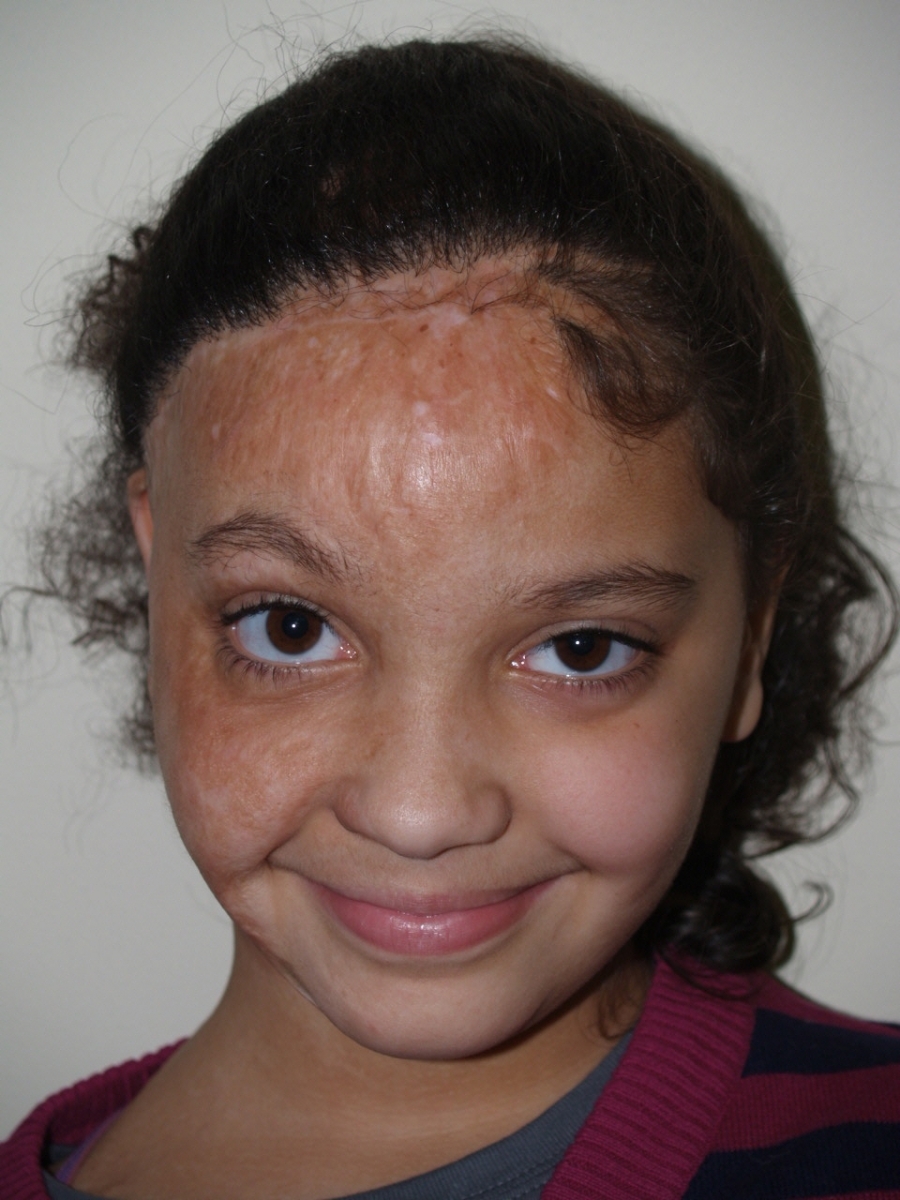 Addison 2 years post-surgery that included stretching out the normal half of scalp with balloon tissue expanders, as well as hair grafting. 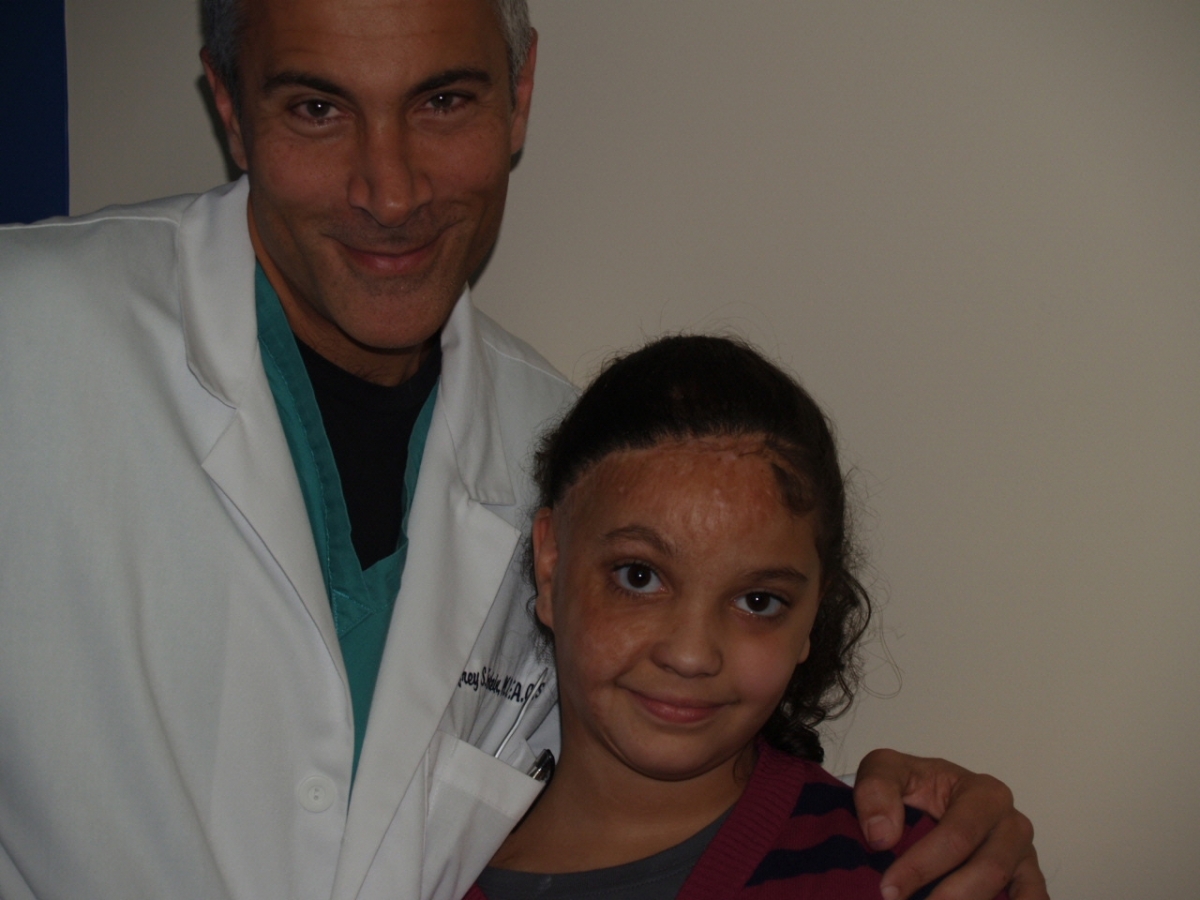