In a recent issue of the Forum, I reviewed some of the relevant research on follicular cell implantation (“hair cloning”) and stem cell hair regrowth over the last ten years. In this column, I’ll review recent studies that relate to this topic as well, and in particular a recent report from Cotsarelis and his group (cited above). Although these reports add even more complexity, they also give us new hope that cell therapy may someday actually work.

It can be a little confusing understanding all the ways implanted cells can be used to treated hair loss, so I tried to organize it into a simple chart so I could better understand it myself (Figure 1). Cells from the patients’ hair follicles (e.g., dermal papilla) would be isolated, multiplied in cell culture, and then used therapeutically. In the simplest technique, dissociated cultured cells are implanted into the skin in the hope they will create new follicles (“follicular neogenesis”) (Figure 1A). Several groups that have tried this over the past 10 years have been unsuccessful.

Another way of stimulating hair growth is by implanting cells and having them attach themselves to existing follicles and confer properties of the donor cells to the miniaturizing follicle (Figure 1B). This is the approach being tested by RepliCel using cultured dermal sheath cup cells. Another way is to begin the follicular neogenesis process either in culture dishes (Figure 1C) or in animals acting as intermediate hosts (Figure 1D). The implantation could then be carried out like a standard hair transplant, placing individual “bio-engineered” grafts into recipient sites.

In the past, we have always thought of the patient’s hair follicle as the donor source for cells. This creates certain limitations, particularly with the generation of epithelial stem cells. Stem cells by their very nature are often in short supply. But what if we could create unlimited epithelial stem cells? A recent report by Cotsarelis and Xu suggests that this may in fact be possible.

Previous work by stem cell scientists showed somatic (normal non-stem) cells could be made into “induced pluripotent stem cells” using specific cues (cMYC, SOX2, KLF4, and OCT4). These “iPSCs” resembled embryonic stem cells in their ability to differentiate into a large variety of cell types, but previous attempts to turn them into “folliculogenic” epithelial stem cells had been unsuccessful. In the report by Cotsarelis and Xu, they succeeded in turning iPSCs into epithelial stem cells capable of generating all normal epithelial layers of the human hair follicle.2 They accomplished this using precise sequencing of retinoic acid (RA) followed by a combination of epidermal growth factor (EGF) and bone morphogenetic protein (BMP4), and ending with EGF treatment alone. They confirmed the identity of their newly generated cells using known markers for bulge epithelial stem cells (cyokeratin 15, CD200, and ITGA6). Furthermore, when these epithelial stem cells were combined with dermal cells and injected (or placed in a silicone chamber) into immunodeficient mice, they generated hair follicles with all the normal markers.

While this report is a very exciting breakthrough, it should be pointed out that the process of taking a normal body cell (somatic cell) and turning it into a hair-generating epithelial stem cell involves multiple steps using agents that alter the basic genetic expression, thus raising the concern of tumor formation. Any therapy based on these techniques will likely take years of validation and testing to ensure its safety.

This does help in providing a solution for one-half of the “hair cloning” puzzle. Besides epithelial stem cells, we need hair-inducing dermal cells to achieve follicular neogenesis. Nothing has been reported in this way since the 2010 report by Park and colleagues in the Journal Dermatological Science, which reported the ability to transform mesenchymal stem cells from either bone marrow or umbilical cord into dermal papilla cells that can induce hair follicle formation.3 They did this using specific “dermal papilla forming medium” that was serum free and contained hydrocortisone and hepatocyte growth factor (HGF). Given the advances in stem cell biology, it can be assumed that it is only a matter of time before this technique or something similar is turned into a validated and consistent method to generate hair inductive dermal cells from other cell types.

These methods to reprogram regular cells into stem cells raise significant safety concerns as mentioned. A recent report by Vacanti and colleagues suggests that cells can be triggered to become stem cells simply by subjecting them to physical stress, such as half an hour in acid bath.4 This breakthrough report suggests all cells retain the potential to revert back to stem cells in response to physical stress (e.g., wound healing), a concept that has far-reaching implications. Although it has not been tested, it may be that stem cells derived from physical stimulus (e.g., low pH) are less prone to tumor formation than those derived from the specific biologic triggers described earlier.

Putting this altogether, and referring back to the chart in Figure 1, we are starting to see that some of the assumptions used at the beginning of hair cloning projects may no longer be valid. We may not be limited to the cells derived from the patient’s follicle and may soon be able to create “folliculogenic” stem cells using other readily available cell types. It will take considerable time and research to test these new concepts, but the dream of unlimited hair, even if further down the road, is becoming a more realistic possibility. 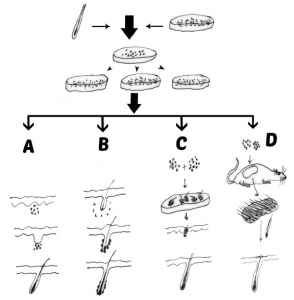