I am 34 years old. I have always considered the physical appearance as essential in our modern world, and it has always been so for me. This is why I have done a lot of sports since my young age, such as fitness, snowboard and martial arts. I also take great care in the quality of the food I eat. However, even though I am in excellent health, I started losing my hair at the age of 20. This was in 1987. I was the only one in the family. Even my grandfather had all of his hair at the age of 75.

Four years later, I had lost half of my hair and this started to distress me very much. I started to feel less confident. I looked for answers but no one gave me the right explanations to my problem. A pharmacist told me to take minoxidil, which I did, and the product stopped my hair loss for about three years. But, I realized that only surgery could do something for me. I inquired about micrografts, but the results I saw did not appeal to me. I was dreaming to get back a full head of hair, but the hair transplant surgeons I contacted told me they could only transplant my frontal baldness with what I had left. By chance, one of my relatives who had the same problem underwent surgery, and the result I saw was outstanding.

He had something done, which I had never heard of before, and there was apparently little known. The technique is called “Scalp Extension” which was able to eliminate 16 cm wide bald scalp of the top and posterior area of my head in two months time and three operations. Basically, it’s an elastic band called “scalp extender” placed under the scalp temporarily which stretches and pulls up progressively the skin on which there is still hair on each side of the head allowing the surgeon to remove all the center baldness and bring the two sides together. The night after the first procedure was rather painful. However, I was ready for it as the doctor had told me before, and my main goal was to get back a full head of hair.

Two days after I went back to work without anyone noticing anything. Then, I had three sessions of grafts for my frontal baldness, and all the surgeries were done in less than six months time. My first operation was done in 1997, and the after photos were taken 10 months later. I can say how good I feel not to be bald anymore.

“I am writing this letter three years after I am so pleased to have done this surgical treatment. I can comb my hair the way I want and practice all the sports that I wish without thinking about my hair. I have regained all my self-confidence in my professional life as well as with my fiancée. I do not need any longer to spend hours in front of the mirror to try to hide my baldness. No need to say that it has changed my life. I consider that it was very much worth the small financial investment and to feel good for the rest of my life. I hope my testimony will help you make your own decision.” 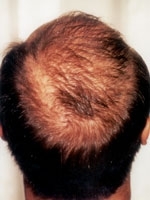 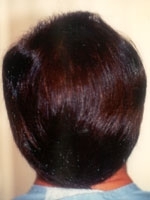 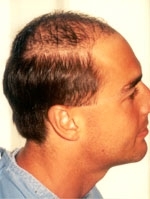 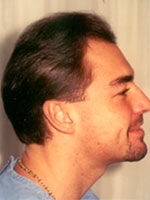 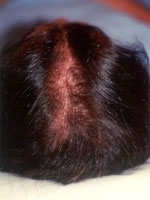