This site uses cookies. By continuing to use this website, you agree to their use. To find out more, including how to control cookies, see here: https://ishrs.org/privacy-policy/

My story begins one February night in 2002 when I went out to a night club. It was the infamous Rhode Island Station Club. What began as a night out with friends, ended as one of the deadliest fires in night club history. 100 people died from this fire and many others were seriously injured. I was one of the lucky ones. I survived the fire, but woke up after a 4 ½ week coma in the intensive care unit of a local hospital. I sustained 2nd and 3rd degree burns over many parts of my body, including my face, head and scalp. As a result, I lost all of the hair on the top of my head.

After many treatments and surgeries, the remaining visible scar from the fire was my baldness. It was a constant reminder of the tragedy and made it difficult to for me to emotionally heal. My baldness kept me down and, at times, depressed. I began researching how to address my baldness. After much research, it seemed that a hair transplant or a wig were the best solutions. I knew that I did not want to wear a wig for the rest of my life, so I began visiting hair restoration doctors. It became clear to me that it wasn’t likely that I could afford hair restoration surgery on my salary. That is, until I met Dr. Mark DiStefano.

After a comprehensive consultation, he explained that he could perform a new procedure called the Triple-Flap that would replace my baldness with natural-appearing, dense hair. He encouraged me to apply for a grant through the ISHRS’s Operation Restore program to cover the costs of the surgery. I went to the web site, read all of the information and applied for the Op Restore grant, which was a very simple process. After a review period, I heard that I was approved for a grant and that Dr. DiStefano would donate his time and materials as well.

I underwent the Triple-Flap correction procedure (i.e., scalp surgeries to remove scarring tissue), which was a total of 3 procedures in all. I now have most of my hair back on the top of my head. I can’t believe that it looks like there was never any hair loss in the crown.

I am very thankful to the ISHRS and Dr. DiStefano. Without the generosity of the ISHRS and the dedication and skill of Dr. Mark DiStefano, I would still be bald, but more importantly, I would still have a constant reminder of that awful night in Rhode Island. I can honestly say that this has helped to ease the emotional pain and allowed me to move on with my life.

Thank you Dr. Mark DiStefano, his staff and the ISHRS for your unbelievable generosity. 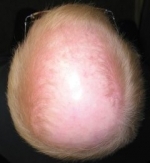