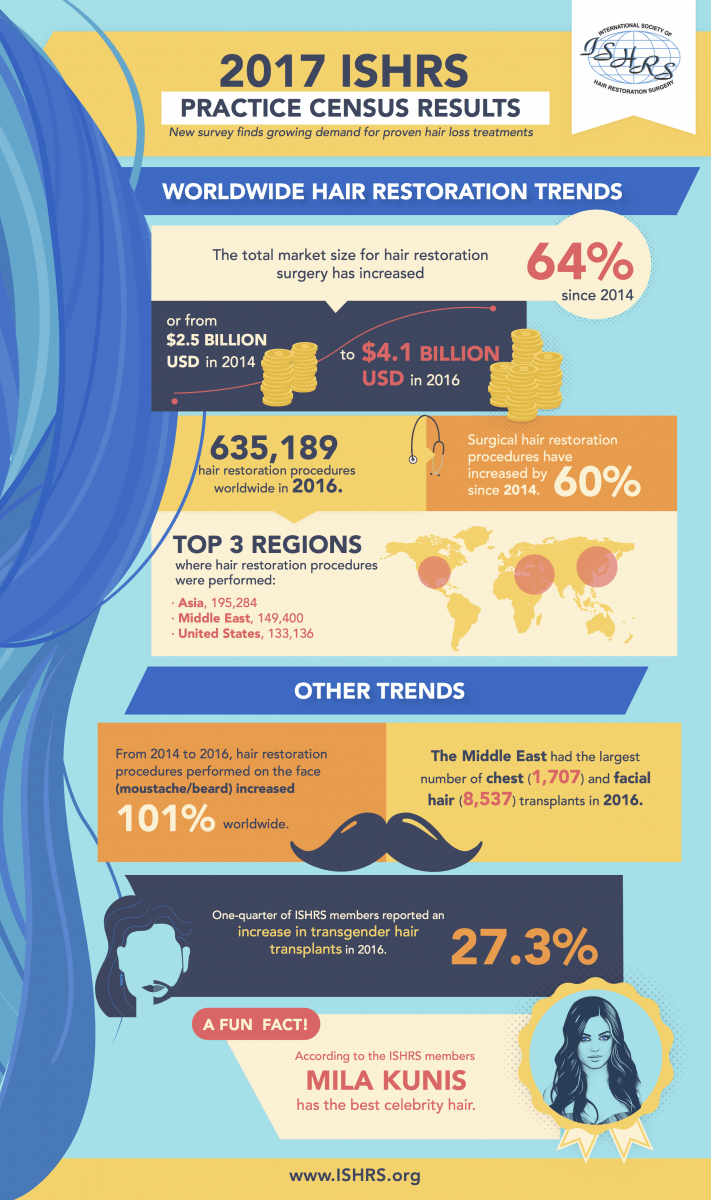 “Like other forms of cosmetic surgery that can boost self-confidence and self-image, people increasingly are more open to talking about having hair transplantation and with that word is spreading how one can achieve permanent, natural-looking results with this proven surgical procedure,” said Ken Washenik, MD, PhD, FISHRS, president of the ISHRS. “In recent years, we have noticed a surge in physicians registering for our annual congresses to learn the procedure, and some techniques have helped newer physicians to the field perform the procedure with greater ease. More educated physicians translate to better results for patients, which I believe is the reason we’re noticing such an increase in the number of procedures taking place.”

While worldwide economic growth remained relatively flat in 2016, the estimated worldwide market for surgical hair restoration enjoyed a robust increase — from $2.5 billion USD in 2014 to $4.1 billion USD in 2016. This represents a 64 percent increase in market size from 2014 (see the full report for details).

Other notable trends and facts from the ISHRS Practice Census survey include:

Interestingly, the majority (61.1 percent) of hair restoration patients treated by ISHRS members in 2016 traveled more than 20 miles/32 kilometers for their procedure, including travel to a different state, region or country. Dr. Washenik stressed that patients who decide to travel for a hair restoration procedure need to do due diligence when researching and deciding on their surgeon, as the ISHRS has witnessed a black market spawning from non-doctor clinics illegally performing the procedure under the auspice of medical tourism.

“In some countries, we are hearing horror stories of patients who receive poor growth, poor results and often permanent damage to their scalps at the hands of unlicensed technicians who are operating hair restoration clinics illegally,” said Dr. Washenik. “While there are many qualified, ethical physicians in these countries who produce good results, others who operate illegal clinics entice unknowing consumers with cheap prices and promises of guaranteed results.”

The International Society of Hair Restoration Surgery (ISHRS) is a global non-profit medical association and the leading authority on hair loss treatment and restoration with more than 1,200 members throughout 70 countries worldwide. Above all, the ISHRS is dedicated to achieving excellence in patient outcomes by promoting the highest standards of medical practice, medical ethics, and research in the medical hair restoration industry. The ISHRS also provides continuing medical education to physicians specializing in hair transplant surgery and is committed to delivering the latest information on medical and surgical treatments to consumers suffering from hair loss, and most commonly from androgenetic alopecia – male pattern baldness and female pattern hair loss. It was founded in 1993 as the first international society to promote continuing quality improvement and education for professionals in the field of hair restoration surgery. For more information and to locate a physician, visit www.ishrs.org.

Conducted by Relevant Research, Inc., of Chicago, IL, USA, the ISHRS 2017 Practice Census is a compilation of information provided solely by participating physicians. The information published in this survey was developed from actual historical information and does not include any projected information. The margin of error for the sample is within plus or minus 4.9 percent at the 95 percent confidence level. For a full reprint of the ISHRS 2017 Practice Census Report, visit Hair Restoration Statistics.