Finasteride For Androgenetic Alopecia Not Associated with Sexual Dysfunction

Method: Adult men visiting a dermatologist’s office for any reason were asked to complete a survey including a modified version of the Arizona Sexual Experience Scale (ASEX) to assess the presence of sexual dysfunction with and without finasteride use.

Conclusion: The use of finasteride does not result in sexual dysfunction in men with AGA. These data are consistent with other large survey-based controlled studies.

Androgenetic alopecia (AGA) refers to pattern hair loss believed to be a result of follicle miniaturization in dihydrotestosterone (DHT) sensitized areas of the scalp. [1] Despite the common occurrence in over 70% of men,[2]onset has been shown to induce loss of self-esteem, depression, introversion, neuroticism and psychological impairment.[3-7] Thus, with only two Food and Drug Administration (FDA) approved medications available,[8] the 5-alpha-reductase inhibitor finasteride is generally considered an important
contributor to male health and quality of life.

Conversely, a small percentage of finasteride users have associated the medication with sexual dysfunction and Post-Finasteride Syndrome (PFS). The term PFS refers to a combination of the former side-effects with a host of additional symptoms including fatigue, muscle weakness and cognitive problems.[9,10] Supporting evidence comes from a controlled trial where a slightly higher proportion of finasteride-treated vs. placebo-treated patients reported adverse events related to sexual function.[11]

Additionally, an increase in reports of sexual dysfunction has been associated with both finasteride[12] and dutasteride[13] (similar 5-alpha-reductase inhibitor) in an extensive post-marketing database. Moreover, identifying finasteride-related sexual dysfunction may not be straightforward as onset has been described as varied, with reports shortly after drug commencement, during later treatment or after medication  is continuation.[9,10]There have also been critiques that the clinical trials which promoted finasteride as safe and well tolerated had inadequate safety reporting.[14]

A mechanism is unknown but it has been proposed that finasteride may lead to a decreased production of neurosteroids, which may regulate sexual desire and function[15] and that impaired testosterone metabolism might lead to relative oestrogen excess.[16] Nonetheless, it has been stated that observations of finasteride-related sexual dysfunction are less prevalent in the actual clinical experience compared to reports in the literature.[17]

Similarly, meta-analysis and systematic review of the literature found a lack of
significant association of finasteride use for AGA treatment and sexual dysfunction.[18] To address the discrepancies, the International Index of Erectile Function (IIEF) questionnaire (standardized method for assessment of sexual dysfunction[19]) was employed to specifically investigate sexual side-effects of finasteride use in the treatment of AGA. In three large studies (n = 186,20 236,17 58621), no difference was observed in comparison with age-matched controls.

This was a survey-based study in a single-centre setting. Adult men visiting a dermatologist’s office in Ohio, USA, for any reason were asked to complete a survey about sex. The survey included a modified Arizona Sexual Experience Scale (ASEX) and additional questions related to duration of finasteride use, reduced sexual performance and loss of libido during finasteride use (yes/no), and steps taken if sexual dysfunction was reported.

Non-finasteride users completed the same survey, but questions did not refer to finasteride. The ASEX consisted of 5 questions, with possible responses on a Likert scale ranging from 1 (extremely affirmative) to 6 (extremely negative) on each question. For example, the question “How easily can you reach an orgasm?” is scored from 1—extremely easily to 6—never reach orgasm. Scores on the ASEX were summed for a total score with possible scores of 5-30. A score of 19 or higher was considered  indicative of sexual dysfunction,[22] 15-18 mild sexual dysfunction and 14 or less indicative of no sexual dysfunction. 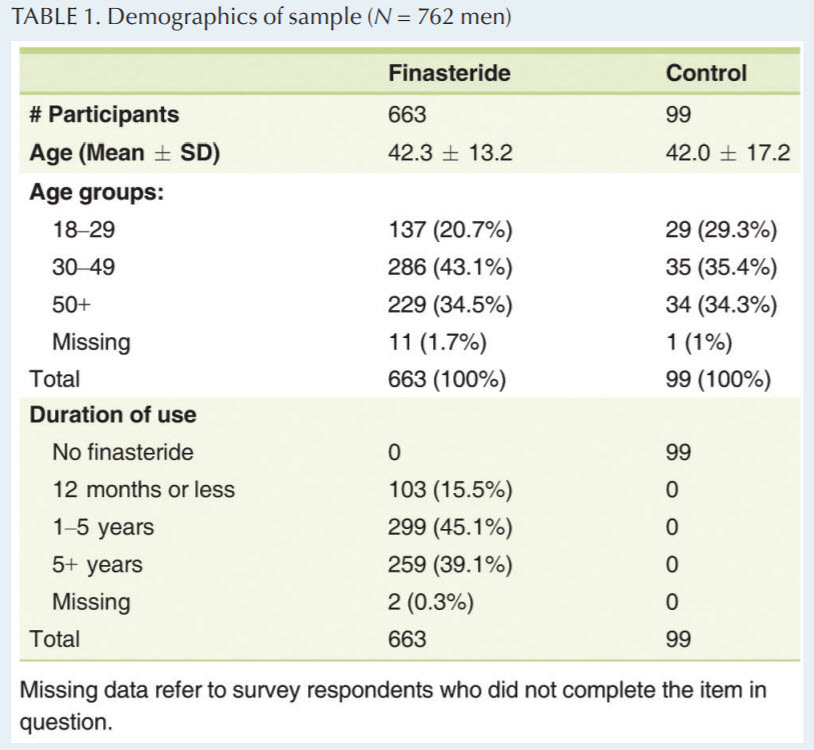 A total of 762 men completed the study, with 663 men reporting they were taking finasteride for varying lengths of time. There was no significant  difference between the finasteride and the control group in mean age (P = 0.832; Table 1). The percentage of men self-reporting loss of libido (P =
0.805) or reduced sexual performance (P = 0.332) did not significantly differ between men taking finasteride and the control group (Table 2). 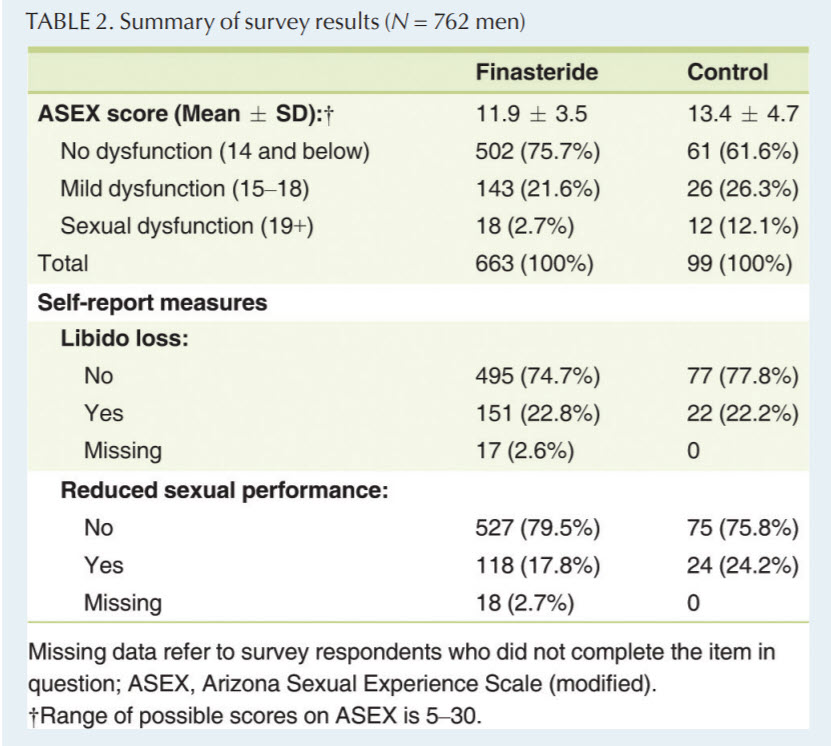 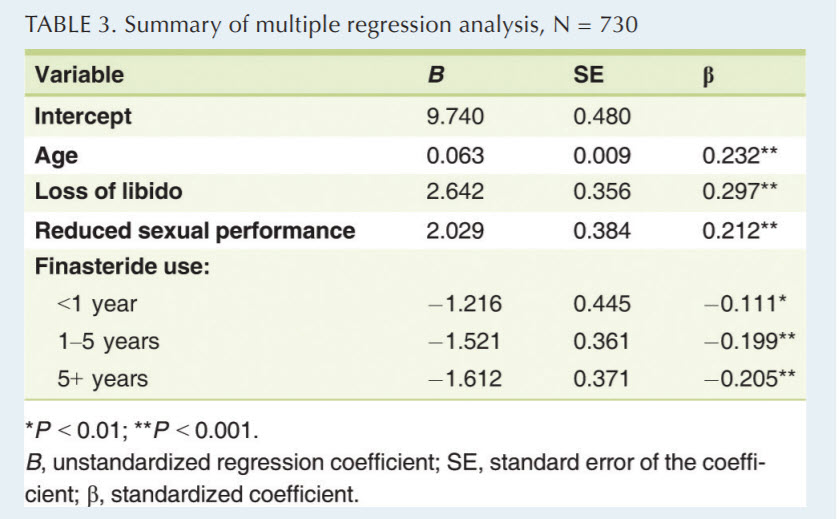 Table 3 shows the regression coefficients and standard errors. All four of the independent variables significantly added to the prediction of the ASEX score. An increase in age of 1 year is associated with an increase in ASEX score of 0.063. If men self-reported a decrease in libido or sexual performance, ASEX score was predicted to be, on average, 2.64 and 2.03 points higher, respectively, than men that did not self-report libido loss or reduced sexual performance.

Using the ASEX survey, sexual dysfunction reports in a population of 762 men were not significantly associated with finasteride use. Between the control group and finasteride-experienced patients, there was no difference in
loss of libido, reduced sexual performance or the number of men with an ASEX score indicating sexual dysfunction.

In contrast, results showed that increased age and selfreporting a decrease in libido or sexual performance were indicators for predicting a higher ASEX score. Therefore, the use of finasteride is not believed to be the cause of sexual dysfunction in AGA patients.

The association of sexual dysfunction and AGA patients might be explained through another aspect of the disease. Sexual dysfunction has previously been linked to both depression[23] and a negative body image[24]such as the possible impact of hair loss, especially in young men.[25] In a recent study, an increased risk of sexual dysfunction was observed in men 18-40 years of age with moderate to severe AGA and psychosocial impairment accredited to body image changes due to hair loss.[25]

Likewise, an investigation of PFS patients revealed major depressive disorder in 50% (n = 16) of the population.[26] It has also been pointed out that an increased risk of sexual dysfunction may be inherent to alopecia-diagnosed men due to a modified conversion of testosterone tdihydrotestosterone observed in these patients.[27] Similarly, it has been suggested that prescribing guidelines have resulted in finasteride treatment arm populations that are naturally more susceptible to the  development of sexual dysfunction vs. comparator populations.

This scenario is illustrated in benign prostate hyperplasia trials where the former have been diagnosed for a longer duration and are often less healthy because alpha blockers are the preferred first-line treatment with finasteride recommended once the disease has progressed.[27] Once this variable is controlled for, no significant increase is observed in patients prescribed finasteride.[27] In addition, there is evidence of a nocebo effect[28] (an adverse side-effect that is not a direct result of the specific pharmacological action of the drug).

Consequently, patients counseled on potential sexual side-effects are more likely to experience them.[28] It is also important to examine the AGA studies which suggest that sexual dysfunction symptoms from finasteride use worsen with time and persist after medication is discontinued.10,29,30 Key aspects to consider are the use of a retrospective design; a targeted patient  population recruited from biased websites; and lack of placebo controls. Therefore, the results are subject to selection bias, possible placebo effects due to unknown prior counseling and recall bias as many had been experiencing sexual side-effects for more than 3 years.[31]

Additionally, care must be taken when selecting a study population; for example,  the prevalence of sexual dysfunction in the general population should be considered. Studies investigating prevalence in various regions and age groups have reported a high likelihood, from approximately 5-50 percent,32-44 stressing the requirement for age-matched controls in the research of drug-induced sexual side-effects.

This article was funded by a research grant from the International Society of Hair Restoration Surgery. It was previously published by the European Academy of Dermatology and Venereology. (J Eur Acad Dermatol Venereol. 2019 Mar 5. DOI: 10.1111/jdv.15548).